Salmon and Steelhead Species in Washington 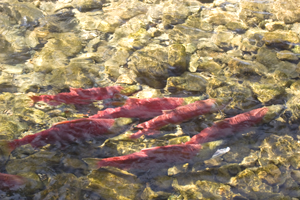 Salmon and steelhead have long played an important role in the ecology, economy and culture of the Pacific Northwest, providing a source of food for humans and wildlife alike. Unfortunately, many naturally spawning stocks are struggling to survive significant losses in spawning and rearing habitat and other factors related to growth in the region's human population over the past century.

There are five species of Pacific salmon in Washington - chinook, coho, chum, pink and sockeye - all emerge from eggs and rear in freshwater, migrate to sea to feed, then return to their natal waters to spawn. Scientists use the term "salmonid" to refer to salmon, steelhead and anadromous trout species that share this anadromous lifecycle.

Each salmonid species is adapted to the natural conditions found in Washington rivers and in the ocean. Salmon and steelhead are further divided into 486 known "populations," each a scientifically designated, biologically distinct group of individuals (e.g., Lower Columbia River Spring Chinook, Skagit River coho) adapted to specific streams, estuaries and other conditions. When thousands of mature salmon spawn and die, they do far more than produce another generation. They also provide a source of nutrition, arriving in the fall, that allows many animals to survive the harshness of winter. Where salmon runs have become extinct, the local ecosystem suffers. Species such as bear, eagle, mink and river otter suffer large population losses when salmon runs decline. 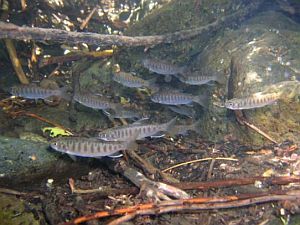 Although the habitat requirements of each species of salmon and steelhead differ somewhat, all share some common habitat needs to support life stage development (Spence et al. 1996).


How are Washington's Salmon and Steelhead doing?

In the next few years, 16 more geographically distinct subgroups (i.e., evolutionarily significant units composed of several populations) of Chinook, coho, chum, and sockeye salmon, as well as several steelhead groups, were listed as either threatened or endangered. By 1999 75% of the state was covered by federal listings of at-risk salmon.

Washington's 2010 State of the Salmon in Watershed Report provided an overview of which salmon and steelhead populations are increasing, decreasing or showing no changes.

For status and information on specific populations in Washington you can click on each species of "salmonid" below and get a listing of all the populations within that species name:

SalmonScape, the Washington Department of Fish and Wildlife's interactive, computer mapping system, is one of the most important tools created thus far to deliver scientific information to those involved in on-the-ground salmon recovery projects. SalmonScape delivers the science that helps recovery planners identify and prioritize the restoration and protection activities that offer the greatest benefit to fish. The site also offers a significant environmental education tool for the general public.

The SalmonScape System merges fish and habitat data collected by state, federal, tribal and local biologists and presents it in an integrated geographically enabled system that can be readily accessed by other agencies and citizens.

With SalmonScape, interested people can access an array of previously scattered data pertinent to salmon and fish habitat. Selected map layers can be downloaded from the SalmonScape site and can be integrated with information collected and managed by government, industry and citizens.

A population is a scientifically designated, biologically distinct group of individuals (e.g., Lower Columbia River Spring Chinook, Skagit River coho) adapted to life in the special conditions of our state's rivers and estuaries.