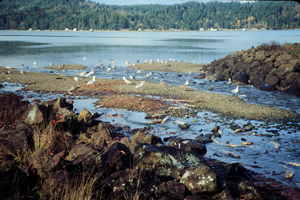 Harvest
Two different types of harvest have contributed to the decline of summer chum salmon in the region: pre-terminal fisheries in the Strait of Juan de Fuca (marine waters seaward of Hood Canal and Discovery and Sequim Bays) and terminal fisheries in most of the marine waters of Hood Canal. For Hood Canal summer chum stocks, pre-terminal harvests occur annually, primarily in fisheries for pink and sockeye salmon in the Strait of Juan de Fuca.

The impact of these fisheries during the period of decline of Hood Canal stocks has been rated low. After 1974, an added level of fishery exploitation began to occur in the terminal area, resulting in high exploitation rates through the 1980s. Terminal harvest has been rated as a major impact on Hood Canal summer chum salmon. To address this impact, the co-managers instituted harvest management regimes designed to allow the rebuilding and maintenance of self-sustaining summer chum populations throughout Hood Canal and eastern Strait of Juan de Fuca. The regimes that were established are part of an ongoing program that the co-managers monitor and adapt to new information.

The recovery plan concluded that the harvest management regime established by the fisheries co-managers for Hood Canal/eastern Strait of Juan de Fuca summer chum salmon is working according to expectations and contributes to recovery of the species. The recovery plan supports the continuation of these regimes, which includes zero direct harvest of listed species and conservative fishing regulations for other stocks to reduce the incidental harvest of summer chum.

Hatcheries
The co-managers initiated a supplementation program in 1992 that releases hatchery raised fish to address the high risk of extinction of certain summer chum stocks. These efforts are also intended to reintroduce summer chum into watersheds where they have become extinct and to generally increase the likelihood of recovery of summer chum to a healthy status. This program uses strict criteria and monitoring to minimize the potential negative impacts of hatcheries, such as reducing diversity within and between wild stocks.

Summer chum salmon supplementation programs are operated on Lilliwaup Creek, Hamma Hamma River, and Jimmycomelately Creek. Summer chum salmon are being reintroduced into two streams where they had gone extinct: Big Beef Creek and the Tahuya River. Supplementation or reintroduction programs have been terminated on several streams because they have met the production level goals. Projects that have been terminated include Big Quilcene River, Salmon Creek, Chimacum Creek, and the Union River. The last releases of fish from these programs occurred in 2004.

The recovery plan supports the continuation of the supplementation programs underway or planned in the planning area.

Counties in this Region