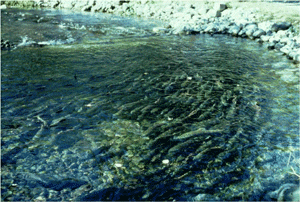 Seventeen populations of salmon and steelhead in Washington are currently listed as "threatened" or "endangered" under the federal Endangered Species Act (ESA). Starting with Snake River sockeye in 1991, listed populations now include distinct genetic strains of Chinook, coho, chum and sockeye salmon - as well as steelhead - across 75 percent of the state.

The stated purpose of the ESA, approved by Congress in 1973, is to protect species and "the ecosystems upon which they depend." The law is administered by the National Oceanic and Atmospheric Administration (NOAA) for saltwater species and by the U.S. Fish and Wildlife Service (USFWS) for freshwater species.

For salmon and steelhead, the primary goal of the ESA is to restore wild, naturally spawning populations at risk of becoming extinct. Hatchery fish may be included in some listings, primarily as a means of preserving genetic characteristics of wild populations in decline.

Both federal agencies have cited loss of spawning and rearing habitat as the primary cause for declines in most listed populations. Other factors include overfishing, hatchery practices and barriers presented by hydroelectric dams.

Under the ESA, it is illegal to "take" (i.e. kill or harm) even a single member of a listed population without federal approval. This provision applies to a wide range of activities, from fisheries management to land development. Under the law, states and tribes must obtain approval to authorize any fishery or hatchery program that could affect listed species.

The ESA also directs NOAA and USFWS to develop regional recovery plans outlining actions needed to restore each listed population. Taking a novel approach dubbed the "Washington Way", citizens of each affected region the state have joined together to write the first draft of recovery plans that reflect a regional consensus.