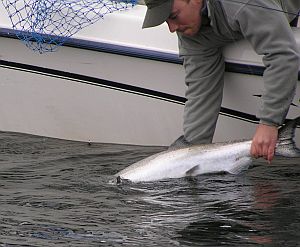 Conservation and Sustainable Opportunities
Salmon fishing has played an important role in the economy and culture of the Pacific Northwest for centuries. Today, salmon fisheries contribute approximately $175 million per year to Washington's economy, provide recreational opportunities for more than 150,000 anglers and sustain timeless tribal traditions.

To preserve this legacy, the Washington Department of Fish and Wildlife (WDFW) has worked with tribal co-managers and NOAA Fisheries to develop an integrated harvest-management system that supports sustainable fisheries while protecting weak salmon populations.

A milestone in that effort was the development of "mark-selective" fisheries in the late 1990s, when WDFW began to restrict the catch to hatchery-reared salmon in specific areas. By mass-marking hatchery salmon before their release, WDFW made them readily identifiable on the fishing grounds.

This strategy has allowed fisheries to continue even in areas where wild salmon populations have been listed for protection under the federal Endangered Species Act (ESA). In those areas, the inadvertent "take" of any listed fish is closely monitored to ensure compliance with strict federal conservation standards.

These conservation measures have brought significant changes to Washington's salmon fisheries, reducing the annual catch in many areas - particularly Puget Sound. At the same time, they have also preserved fishing opportunities throughout the state and the resources that make them possible. 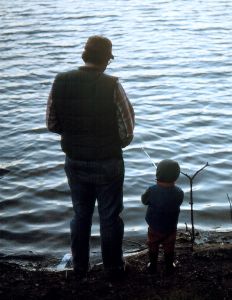 It is estimated that recreational fishers spent $904 million in Washington in 2006 pursuing species such as salmon, steelhead, trout, crab, and clams, with tourists to Washington State contributing over $65 million of those expenditures.

Washington's salmon and steelhead fisheries are managed cooperatively in a unique government-to-government relationship.

One government is the state of Washington. The other governments are Indian tribes whose rights were established in treaties signed with the federal government in the 1850s. In those treaties, the tribes agreed to allow the peaceful settlement of much of western Washington, and provided the land to do so, in exchange for their continued right to fish, gather shellfish, hunt and exercise other sovereign rights. 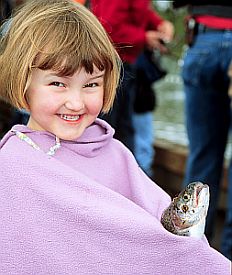